My partner and I were the only ones on the desolate Betatakin hike, one half of the Navajo National Monument in Arizona. I learned Betatakin translates in the Navajo (or Diné) language to “house built on a ledge.”

One of my first observations in my travels through Navajo Nation was that most of the homes were underneath, on top of, or near massive rock formations and hills as opposed to in the open fields and on flat stretches of land. The proximity to the mountains and formations is important. According to traditions, the mountains were placed here by the Holy People, and the Earth People were to live in a way that achieves harmony and balance. I have gathered that positioning is everything to the Navajo, which always was and remains relevant to this country’s history.

The Betatakin trail has three routes. It was one of the quietest hikes I’ve ever been on. We could hear the whiney flies and this elusive insect that sounded like maracas, and that’s pretty much it. I forget how deafening silence can be. The sand was a redish powder that’s soft to the step.

The information distributed throughout the trail was high quality even in comparison to other botanical gardens I have frequented—recently being the Phoenix Botanical Garden and the Chicago Botanical Garden (both great places). My reasoning here is because not only were the plants and shrubbery named, but they were described in great detail for their livelihood and usage. For example, the Hesperaloe, an aloe plant with scraggly hairs, was used by Natives in shampoos. The plethora of information makes sense, given that the Navajo and Hopi peoples were some of the earliest pioneers of natural ointments and medicines. I regret not partaking in a guided tour, which I wasn’t aware of until later.

And I don’t know if this was a feeling that I had but every plant, branch, tree, and bush on the trail seemed to have a place. I felt a little like I was walking into an exhibit or a store, where everything was specifically arranged. And I felt a little like Abu from Aladdin about to disturb the sand gods from their slumber after I pocketed a small stone that was layered like Neapolitan ice cream. 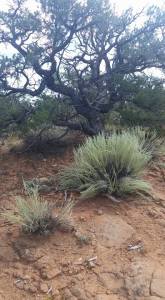 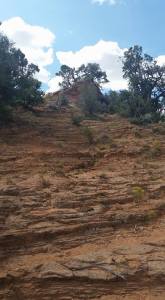 Overall, I’m honored to have had this experience on a landmark that will hopefully continue to shape the history of a land that never really belonged to anyone expect for the Native peoples. Looking over the multi-layered cliffs, sifting my shoes through the soft sand, and marveling at the forest sitting in the bowl of the canyon filled me with a profound appreciation. I bow my head in humility to this experience. And not because I think any Navajo person is better than me or I feel personally indebted, but because these are the voices of history’s most spiritual and land loving people who deserve the respect and recognition.

My partner and I enjoyed the bramble trees, rabbit brush, Douglas fir and the whole host of other named and unnamed plant life. I was intrigued by the four or five different lizards poking out of the rocks and sand. I tried to record a lizard who kept extending and collapsing his limbs, making it look like he was doing push-ups. Silly buggers.

The trail was a steep one that winded downward. We were careful with our footing and obeyed the signs warning against venturing off the path. The trip was worth it for what was waiting for us at the bottom. Not only was there a full, green forest sitting in the middle of the 560-foot deep canyon, but there were cliff dwellings, left by the Ancestral Puebloan peoples, in the alcove above it. I could feel my heart rocketing around inside my chest at the sight of such a small village. My eyes roamed the sandstone blocks and climbed the ladders from room to room. Seeing a piece of history locked behind a glass box in a museum is one thing, but venturing down a trail to find discover it is an entirely new experience for me. There’s not much left for me to say except for that it was truly breath-taking, a phrase that I try not to use often. 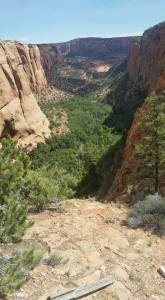 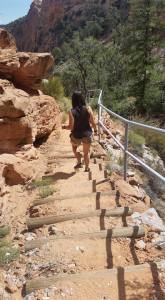 It was an hour before we came across another group, two older women who were following a Navajo guide. I overheard the women talk about my partner and I who walked up the steep rock steps with ease. One woman huffed her exhaustion and said, “Climbing is a young man’s sport.” And the guide goes, “I don’t know, but I feel like some women can do it better.” I smiled at him and telepathically gave his heart a little squeeze for that sentence.

On our way out we stopped by the visitor’s center. There was an elderly woman decked out in her most intricate patterned tribal gear. She was sitting in a chair, carefully working on a rug. She stared up at me with these big, earthy brown eyes, and I suddenly felt awkward and stupid standing there, not saying anything. I wanted to ask her questions and complement her art. I don’t know, I guess I didn’t want to feel like a bumbling tourist.

By the entryway, there was a man who was painting. On the table were small paintings on scraps of canvas. He had painted red rock formations, hogans, buttes, among other natural scenes on the Navajo land. Some were in front of sunsets; others were cast against a sky dripping with stars. His name is John Bahe Smith. Again, I wished I would have asked him questions about himself. What is it with people too afraid to ask questions about human experience? I regret my silence. But he seemed pretty happy about the sale, and I was happy to give a talented artist my money. I can’t wait to frame my new treasure. 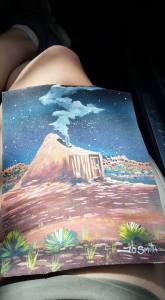 On the back of the piece John wrote:

Fork Stick Hogan
The Holy People made the first hogan—from the beginning of the world—and faced it to the East.